THE HISTORY OF THE BANANA

Bananas, the staple tropical fruit found in almost every household but how did they come to be such a favourite?

We all know the cavendish banana, possibly without realising. It's the variety found on the shelves at every supermarket in the land. The cavendish has become a true staple of many people's diets due to their delicious flavour and high potassium and antioxidant content.

But did you know that there are over 1000 different varieties of banana grown around the world, the cavendish really is the tip of the iceberg!

Originally cultivated in Papua New Guinea way back in 5000 BC, it's rumoured that Alexander the Great was the first person to bring bananas to Europe.

It was another 800 years, however, until they got the name 'banana', when soldiers started calling the fruit by the Arabic word 'banan', meaning 'finger' - this fact becomes even more interesting when we consider that still today we say that bananas grow in 'hands'!

Bananas were introduced to the Caribbean during the sixteenth century, and around the same time Spanish settlers attempted to grow bananas in Florida, but the harsh winters there made cultivation
virtually impossible.

Historians believe that it was not until the 1876 World's Fair in Philadelphia that bananas started to become a recognisable food to most Americans. Before then, bananas were considered a delicacy and were often eaten with a knife and fork!

The virtual ceasing of cultivation of the Gros Michel - the first type of banana to be grown on a large scale - allowed the Cavendish to take over as the world's best-selling banana variety.

And the rest, as they say, is history!

If learning all this information has got you feeling peckish, don't worry, as we have some great banana-based recipes you can try!

For a twist on the enduring classic banana bread, we recommend this nutella banana bread, a chocolaty-fruity creation that makes the perfect breakfast, snack, or dessert.

Or, why not take 15 minutes to make these delicious frozen banana lollies, the perfect cooling treat for summer. 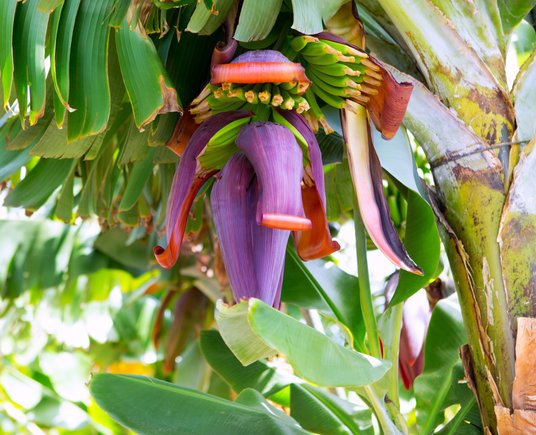 Whilst you're here, we'd love to tell you about some of the most popular varieties of banana that we sell.

One of the most visually distinctive bananas, red dacca bananas have an intriguing flavour, with some eaters describing it as a delectable mix of berry, mango, and a hint of vanilla, and they have even more nutritional value than the typical cavendish variety. Catch them perfectly ripe and they are definitely sweeter than a supermarket-bought banana. Our finest recommendation is our Sri Lankan reds, but they're only available for pre-order - they're worth the wait though!

Also known as the 'chunky banana' because of their stubby shape, burro bananas grow primarily in Mexico and the Philippines, however, we source ours from the Caribbean. Not quite as sweet as other varieties, their slightly tart, lemon-like flavour makes them a delicious treat.

Similar in appearance to the burro, although much smaller. Apple bananas offer a slightly different texture to what we're used to in the UK, but they nevertheless delight the taste buds with their sweet, creamy flavour that resembles a delectable combination of apple and banana!

These green bananas are also known as cooking bananas in much of the eastern hemisphere because they are such a dietary staple in so many regions. Yet, as well as adding to meals, we also think they offer a scrumptious taste when ripe and eaten out of hand.

One of the most popular types of banana in India, nenthra-pazham are longer than typical bananas, and have dense, but sweet, flesh. The dried slices are some of the best dried bananas we offer so we highly recommend them!

After all this talk about bananas we hope you're hungry for them. To help satisfy that hunger, use the code 'BANANABOOST' for a special discount on all things banana on myexoticfruit.com

Our bank details can be

found on your order confirmation which you will receive by email.